Audience Motivation brought two actions against AMC Live: an action for trademark infringement under Section 27(2)(B) of the Trademarks Act  and an action for passing off. In response, AMC Live claimed that it was entitled to the own-name defence pursuant to Section 28(1)(a) of the act.

Audience Motivation’s marks and AMC Live’s marks had the same specifications within Classes 35 and 41. Their marks are shown below. 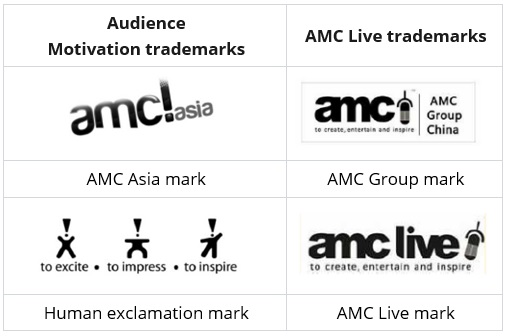 Decision
The Singapore Court of Appeal upheld Audience Motivation’s claims of trademark infringement and passing off. The court also held that AMC Live would not be entitled to the own-name defence with respect to the infringement claim.

Passing off
The appeal court also found that the three elements for passing off had been satisfied, as follows:

The appeal court clarified that the inquiry of "whether the mark was associated with Audience Motivation’s business at the goodwill stage” should be carried out at the misrepresentation stage in order to prevent conflation of what amounted to 'goodwill' when deciding on whether there was damage to goodwill.

For the goodwill element, the appeal court also clarified that the main question to ask was whether goodwill existed in Audience Motivation’s business, as opposed to whether there was goodwill in a specific mark.

For the misrepresentation element, the appeal court held that there should be an inquiry as to whether there was sufficient association between the plaintiff’s goodwill and its “identifiers”. These identifiers need not be restricted to registered marks used in a singular manner, but rather can include unregistered and similar marks used in the past, or a variation of the name or mark.

Own-name defence pursuant to Section 28(1)(a)
The appeal court held that the own-name defence should be available for both the use of a corporate name and one’s own name. The court also held that a finding of “honest practice” requires both an objective and a subjective inquiry. The objective inquiry requires the court to consider the standards and practices that are commonly applied in the industry or business, including the following factors:

On the other hand, the subjective inquiry requires the court to consider whether the defendant had honest intentions when using its own name, including the following factors:

Both inquiries are necessary, but not in themselves sufficient conditions that must be satisfied. Despite establishing the test for honest practice, the court had left open the question of whether a finding of misrepresentation would automatically preclude the operation of the own-name defence.

Applying both the objective and subjective inquiries, the court held that AMC Live could not avail of the own-name defence because:

Comment
Passing off
The case has provided clarification on the law of passing off, allowing greater analytical clarity when applying the classical trinity for passing off. It has also evinced a broader approach when considering whether there was a sufficient association between the plaintiff’s goodwill and its identifiers.

Own-name defence
The case has also led to developments regarding the own-name defence, with the appeal court holding that the defence applies to both a company’s name and an individual’s own name. The court has also rightfully precluded other embellishments of the name from the defence.

Aligning itself with the approach evinced by recent UK case law, the appeal court has also adopted a stricter test vis-à-vis the defence, requiring the defendant to prove both “honest use” and “honest practice”. This development is welcome since it is aligned with the narrow scope and object of the defence, which is to provide for genuine cases of the use of one’s own name, despite being found to have infringed the rights of a registered trademark owner.

Misrepresentation should not automatically preclude operation of own-name defence
The appeal court did not provide a definitive answer to the question of whether a finding of misrepresentation automatically precludes the defence. However, the answer should be no. To answer the question in the affirmative would be legally incoherent. Contrary to dictum in the case, a finding of misrepresentation does not necessarily mean that the use of one’s own name is not in accordance with standards and practices in the industry or business.